Quick & Easy: How To Put On A Duvet Cover Yourself

Does it ever feel like nobody ever taught you the correct way to put on a duvet cover? Scared it's too late to ask for advice? Well, you're not alone, as many people struggle to perform this simple routine task well.

No matter how many years we've had to perfect the skill of dressing a bed, our kip can often feel lumpy and lopsided. Sometimes, it's the most simple tasks that can prove to be the most difficult.

Wrestling to get the duvet evenly distributed can often feel like a full-body workout - but it doesn't have to! We've put together this simple guide of how to put on a duvet cover by highlighting the two most popular methods. 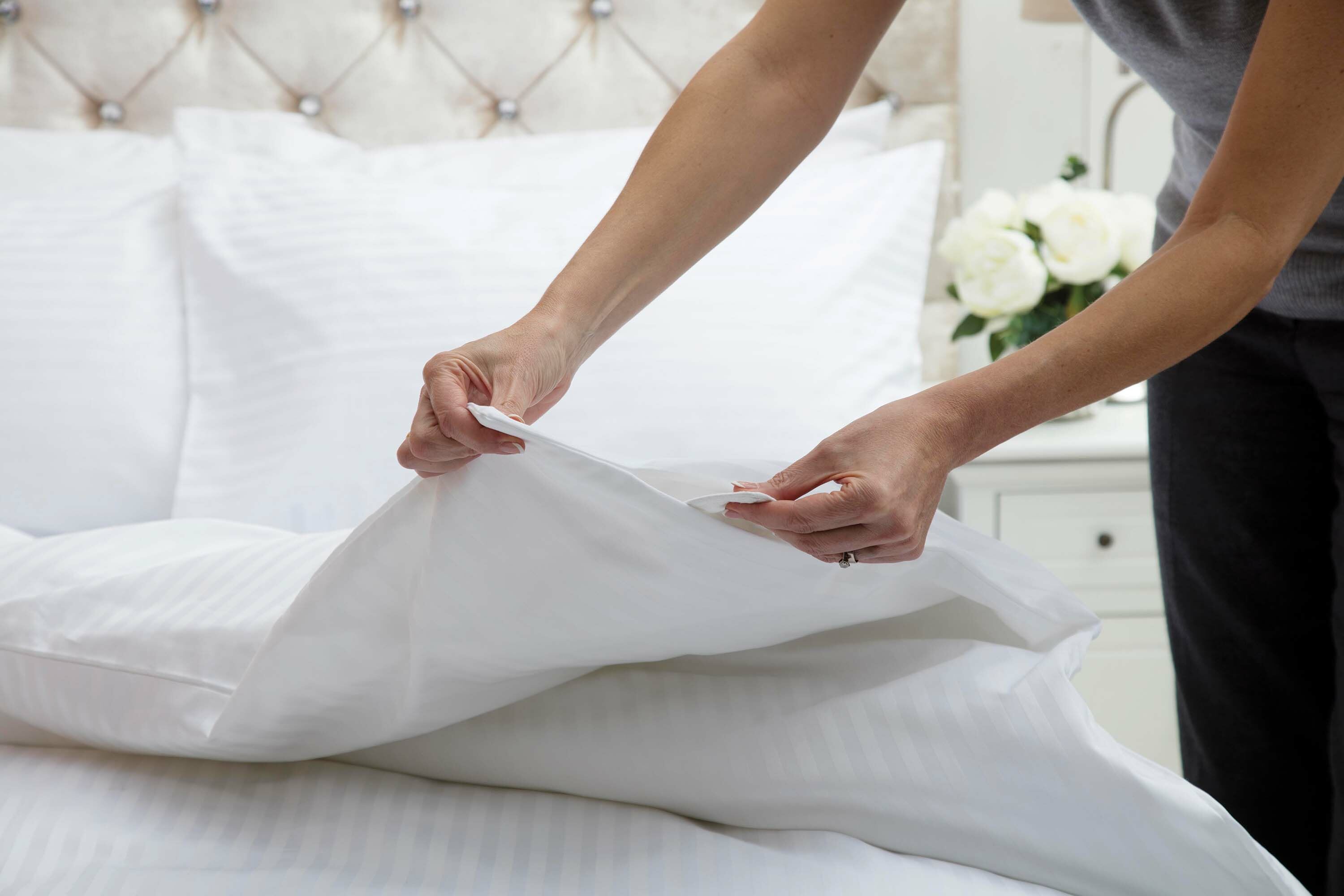 Why Is A Duvet Cover So Hard To Put On?

A duvet cover is hard to put on when you don't know either the traditional method or the burrito method - this article will teach you both! Once you master a technique, you'll never face a duvet cover with a feeling of dread again.

Besides lacking technique, there is a whole host of other reasons why you may be struggling to get your duvet top corners even.

The main reasons are that your duvet cover is the wrong size or shape, but duvet cover problems could also be the result of having no corner ties to work with. Corner ties make the whole process easier, as they can be fastened to keep each side in place.

To make putting on your duvet cover easier, make sure that your chosen cover is the right size and shape for your duvet. Whether you need a single or an emperor sized duvet cover, you can find them on Belledorm!

If you're unsure of what size your bed is, check the measurements of your bed and compare it to the measurements listed on our site. As a general rule, the cover should be slightly larger than the duvet itself.

The traditional method is the most popular approach to duvet cover fitting, which is why it is named so. It's probably the method you're already using, but doing it incorrectly. Here's how to make the traditional approach work for you...

Always start by laying your duvet insert flat on your bed. Next, turn your duvet cover inside out. The easiest way to do this is to stand at the foot of the bed, with the duvet cover opening facing you, and grab the two top corners from the inside. With the top left corner in your left hand, and the top right corner in your right hand, pull them towards the opening.

With the duvet cover laying inside out on top of the duvet, you can now fasten the top ties to hold the duvet in place. Some duvets come with loops, but if they don't you can easily fasten the ties around the corners.

Step 3: Grab the top corners from inside the cover

Still standing at the foot of the bed, slide your hands inside the duvet cover until you reach the top and grab the two top corners. Next, pull these corners down to the opening. This should turn the duvet cover the right way round, with the duvet itself neatly packed inside.

With the duvet inside the cover, hold the fastened top corners from the outside and give it a shakedown to straighten out any lumps. Once you're satisfied, fasten the bottom corner ties and close the bedding.

The burrito method, as its name suggests, is definitely a more enjoyable approach to fitting a duvet cover. It is sometimes referred to as 'the California roll method'. You may find the burrito method to work best with thinner spring and summer duvet covers.

If you're working with ties, make sure to fasten each corner. The more you can make the duvet corners align with the duvet cover corners, the easier the burrito method becomes.

Standing at the closed cover end, start to tightly roll both the duvet cover and the duvet itself together, as you would with a burrito. Once you've reached the bottom, pull the opening over the burrito shape to enclose the duvet inside the cover and fasten it.

Pinch the corners of the closed opening and slowly unroll the duvet. Look out for bumps and straighten out the duvet as you go. Once fully unrolled, grab the two corners of the duvet and give it a final shake to ensure the duvet is straight.

Belledorm’s proprietary Swift Swap technology has been developed in-house to help customers battle stubborn duvets that refuse to fit into their covers.

It features two hand holes that sit hidden in the top corners of most Belledorm duvet covers.

You can use Belledorm’s Swift Swap technology like this:

Swift Swap is available on most Belledorm Duvet Covers, with Amelia, Persia, Maeva, Maddox, Georgia being our most popular customer choices. 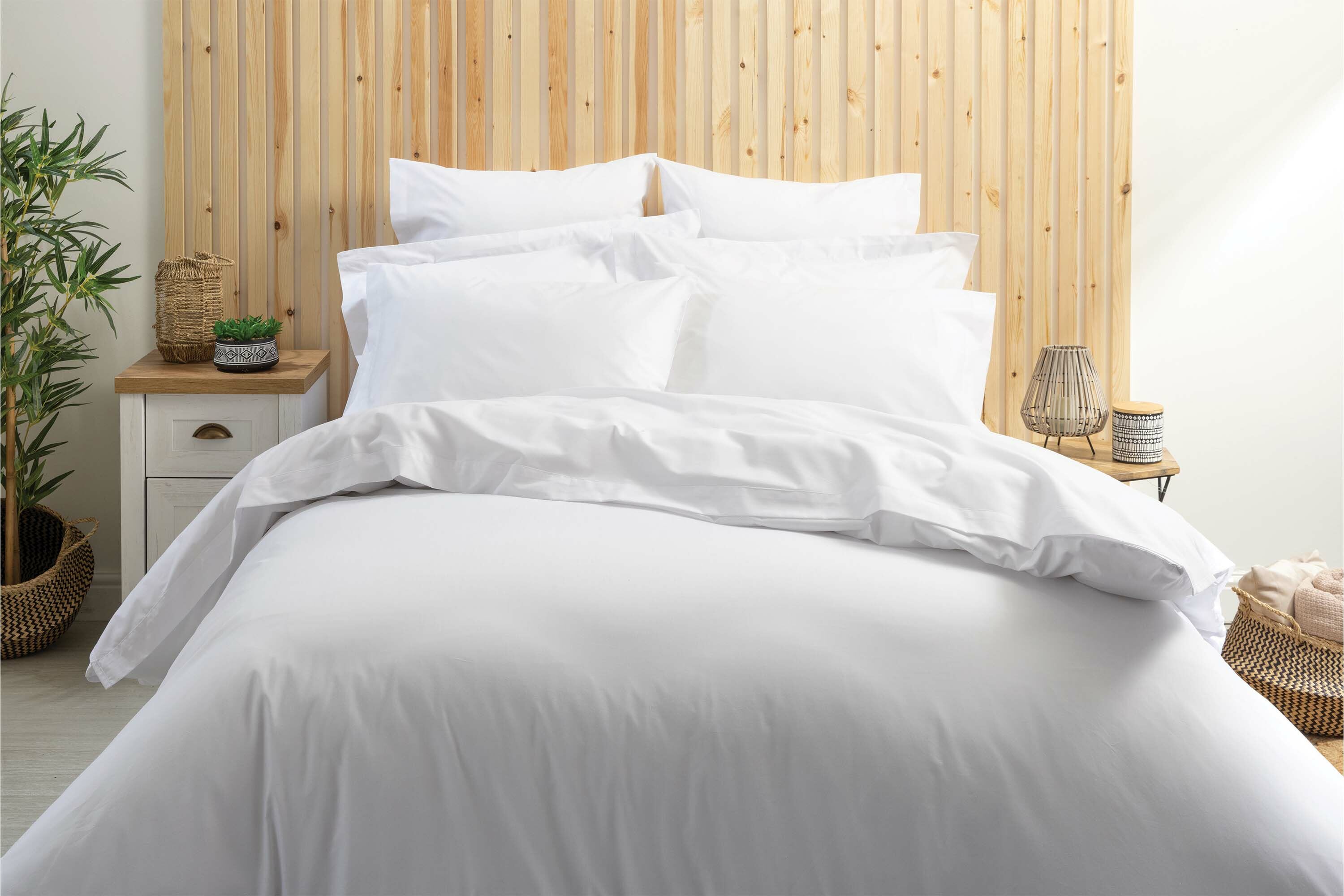 How often should I change my duvet cover?

You should aim to wash and change your duvet cover once every two weeks, according to the Sleep Foundation. Changing your duvet cover regularly will give you plenty of opportunities to master both the traditional and the burrito methods! For more information on how often you should change your bedding, you can refer to our article on the topic.

Which method is best to put on a duvet cover?

You can decide how best to put on a duvet cover based on what works best for you. The traditional approach is arguably the easiest way, but the burrito method is a simple trick and can even be fun to do.

Can I use a large duvet cover for a smaller-sized duvet?

When you put on a duvet cover that is not the right size for the duvet, you're going to suffer from unevenness. It's important to match the duvet with the right size duvet cover to achieve maximum comfort in bed. Whether you require an accurately sized double or a super king duvet, you can find it on Belledorm.

Duvet covers are necessary because they protect the comforter inside from stains. Duvets can be particularly difficult to wash, so many choose to put on a duvet cover to avoid having to.